The lights and some other electrical devices in our new house are controlled by a C-Bus system. Essentially this means that rather than the light switches switching the power to the lights directly, they instead sit on a bus which is connected up to relays which control the power to individual lights. This makes it easy to have smart switches which can control multiple lights and a do a series of tasks (eg dim some lights, pull down a projector screen etc). The most interesting part for me is that when we had the C-Bus system installed is also had an ethernet interface module for the system installed so we can talk to it directly from any of our other computers.

C-Gate is a program which mediates access to the C-Bus interface so multiple programs can access it simultaneously, and fortunately although it was written for windows it’s written in java and runs ok on Linux. The input/output format is not particularly nice for programmatic control, and I ended up writing some scripts that allow for synchronisation of the state between the C-Gate server and an MQTT server.

I already use MQTT as a mechanism to communicate data about power usage in the house. Incidentally I’m also now using the Open Source implementation of MQTT, Mosquitto which for me has been just a drop in replacement of a proprietary version. MQTT can provide a nice uniform interface for apps which insulates them from the details of how data is transferred to and from backend systems. It avoids a bunch of work when the backends change.

I have one perl script which listens for state changes (for example caused by someone pressing a physical light switch) from the C-Bus system and updates the state in MQTT under a simple hierarchy:

And another one which listens for changes in a similar hierarchy in MQTT and sends those changes to the C-Bus system:

The same hierarchy is not used for both to reduce the problem of race conditions and loops occurring. Light numbers are defined in the physical C-Bus setup.

This makes command line control of the lights very straightforward (as long as you know what number a light has been assigned):

but I wanted something a bit more user-friendly. So using a bit of javascript, php and a very useful, but slightly hacked version of phpMQTT, I put together a dodgy web page which shows the state of all the lights and exhaust fans in the house as well as allowing us to control them. 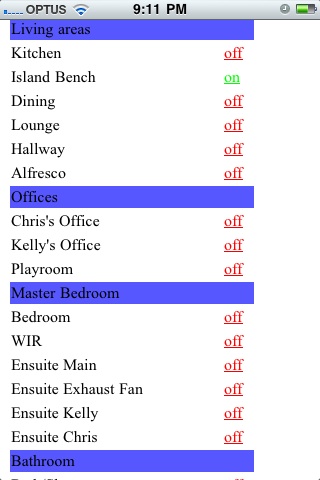 So what’s next on the list to work on?

3 thoughts on “Controlling the house lighting via MQTT”